Kalmbach Media,Jim Wrinn Oct 16, 2021 Kalmbach Media,Jim Wrinn
Union Pacifics Big Boys: The complete story from history to restoration covers the who, what, why, and when of the 25 popular 4-8-8-4 steam locomotives. This book gives the historical background on the early 1940s development, explains why they were built, how they were used, and traces their history until they were retired in the 1950s. It also covers the much anticipated and well covered restoration of No. 4014 starting when it was recovered in a park in 2013 all the way through to its restoration and tour across the United States in the summer of 2019. Trains magazine has been published for almost 80 years, much of which has included extensive coverage of Union Pacifics Big Boys since they were created. Everything you need to know about these popular steam locomotives can be found in this 224-page book. 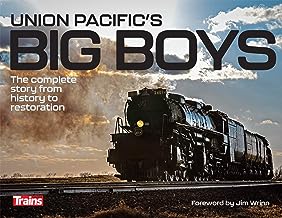